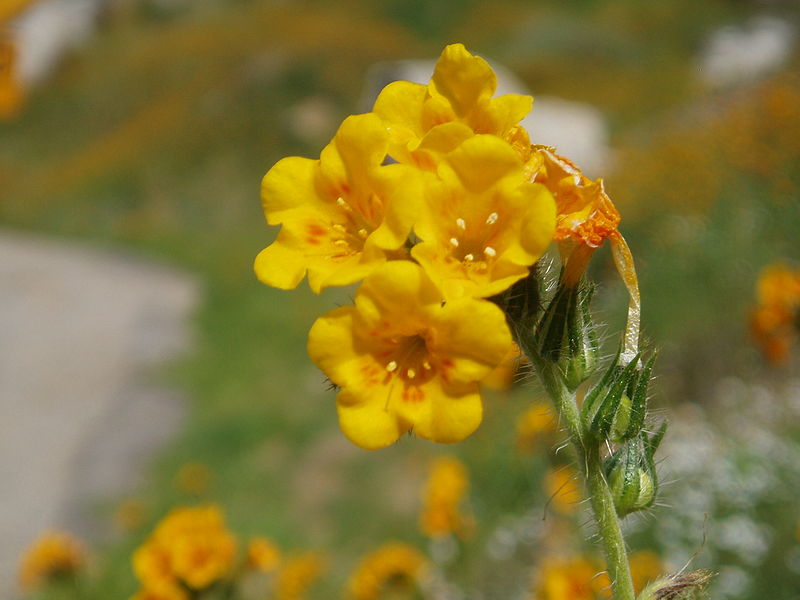 Amsinckia is a genus of flowering plants commonly known as fiddle necks. The common name is derived from the flower stems, bearing many small flowers, which curl over at the top in a manner reminiscent of the head of a fiddle. Fiddle necks are in the family Boraginaceae, along with borage and forget-me-nots.

They are annuals, many of them bristly. Most have an erect stem, whose height varies from 20 to 120 cm. In most species the flowers are yellow, often with an orange tinge. Most are found at relatively low altitudes, below 500 metres.

The seeds and foliage of fiddle necks are poisonous to livestock, particularly cattle, because they contain alkaloids and high concentrations of nitrates. The sharp hairs of the plants can cause skin irritation in humans. However, the shoots, seeds or leaves of several species were used as food by Native Americans, and the plant also had some medicinal uses.

The species are hard to distinguish, and their ranges overlap; furthermore, several of them have large numbers of slightly different varieties, and several of the species hybridise naturally. To decide which species a particular specimen belongs to, therefore, is likely to require a detailed examination with an identification key in hand.