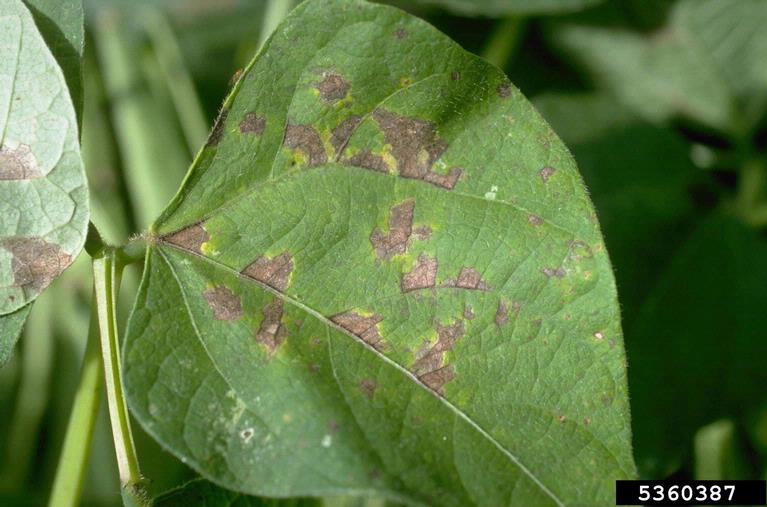 Angular leaf spot (ALS), caused by the fungus Phaeoisariopsis griseola, is considered a serious disease of beans in many regions. The pathogen can infect common, lima, scarlet runner, tepary, black gram, adzuki beans and cowpea, and has been observed on peas. All aerial plant parts, including leaves, petioles, stems and pods can be infected, but symptoms are most recognizable on leaves. Lesions on leaves usually appear as brown spots with a tan or silvery centre that are initially confined to tissue between major veins, which gives it an angular appearance. On some varieties a yellow halo occasionally surrounds lesions and eventually the entire leaflet becomes yellow before senescing. Lesions can be observed on the underside of the leaf and appear slightly more pale than those on the upper surface of the leaflet. A close look at lesions on the underside of a leaflet with a magnifying lens will reveal tiny dark tufts (synnemata) protruding from lesions. These dark tufts are a collection of stalks (conidiophores) that produce spores, which are wind-blown or rain-splashed to other healthy tissue. Lesions on stems and petioles appear dark brown and elongated.