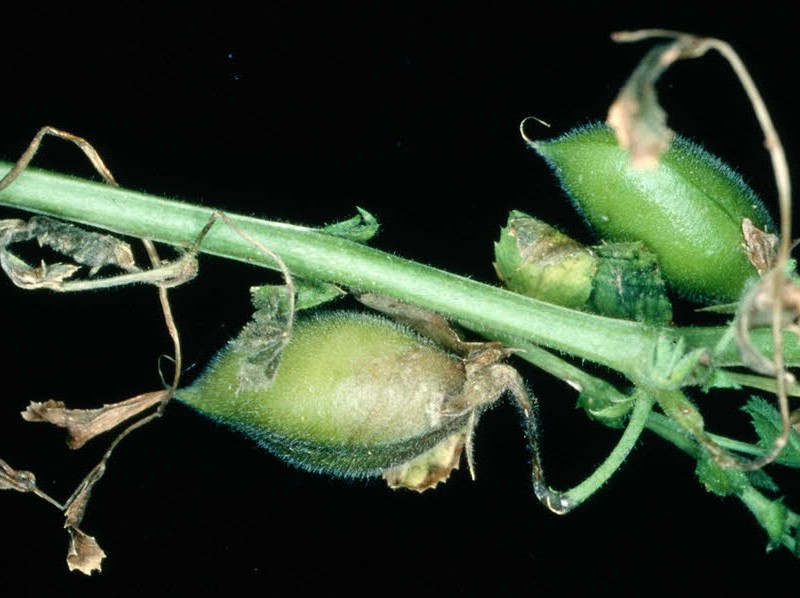 Botrytis grey mould (BGM) in chickpea and faba beans is caused by the fungus Botrytis cinerea. B. cinerea is also a significant pathogen of pulse crops particularly lentils and ornamental plants grown under glasshouse conditions. As well as being a serious pathogen, B. cinerea can infect and invade dying and dead plant tissue. This wide host range and saprophytic capacity means inoculum of B. cinerea is rarely limiting. If conditions favour infection and disease development, BGM will occur. B. cinerea also causes pre and post-emergent seedling death. This happens when chickpea seed, infected during a BGM outbreak, is used for sowing. Seedling disease does not need the wet conditions that are usually required for infection and spread of BGM later in the crop cycle. The first symptom of BGM infection in a crop is often drooping of the terminal branches. If groups of plants are infected, these may appear as yellow patches in the crop. The diagnostic feature is a grey ‘fuzz’ which, under high humidity, develops on flowers, pods, stems and on dead leaves and petioles. Lesions can develop anywhere along the stem but are usually first found on the lower part of the stems often starting in leaf axils. Infected seeds are usually smaller than normal and are often covered with white to grey fungal growth.

How to control Botrytis