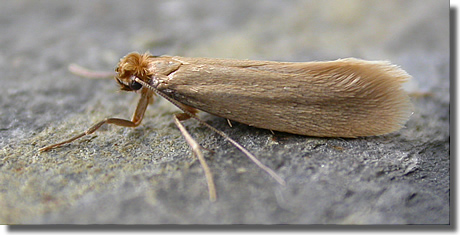 The larvae (caterpillars) of this moth are considered a serious pest, as they can derive nourishment from clothing – in particular wool, but many other natural fibers – and also, like most related species, from stored foods, such as grains.

Females lay eggs in clusters of between 30 and 200 which adhere to surfaces with a gelatin-like glue. These hatch between four and ten days later into near-microscopic white caterpillars which immediately begin to feed. They will also spin mats under which to feed without being readily noticed and from which they will partially emerge at night or under dark conditions to acquire food. Development to the next stage takes place through between five and 45 instars typically over the course of between one month and two years until the pupal stage is reached. At this point, the caterpillars spin cocoons and spend another approximately 10–50 days developing into adults.

After pupation is complete, the adult moths emerge and begin searching for mates. Females tend to move less than males, and both sexes prefer scuttling over surfaces to flying— some adults never fly at all. Adults can live for an additional 15–30 days, after which they die (otherwise death takes place shortly after mating for males and shortly after egg laying for females). Life cycle may be completed within one month under the most favorable conditions (75 °F (24 °C) and 70-75% relative humidity) but may take several years (lower temperatures and humidity will only slow development, larvae will still hatch and grow at temperatures as low as 10 °C (50 °F) and can survive up to 33 °C (91 °F)).

Unlike the caterpillars, the adult moths do not feed: they acquire all of the nutrition and moisture they need while in the larval stage, and once they hatch from cocoons their only goal is to reproduce. They have only atrophied mouth parts and cannot feed on fabric or clothing. All feeding damage is done by the caterpillar (larval) form. Heated buildings allow clothes moths to develop year-round. The overall life cycle from egg to egg typically takes 4–6 months, with two generations per year.

How to control Clothes Moth 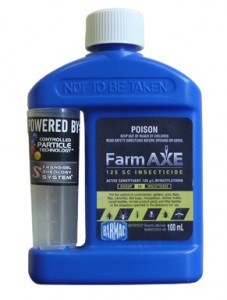 FarmAXE 125 SC is effective against just about every general pest problem – indoors and out.  FarmAXE® has an effective flushing… Read More 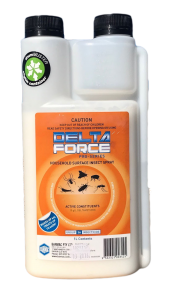 Battleaxe PRO Aerosol has a number of advantages over conventionally packaged insecticides.  These include efficiency, convenience and less waste  with no… Read More