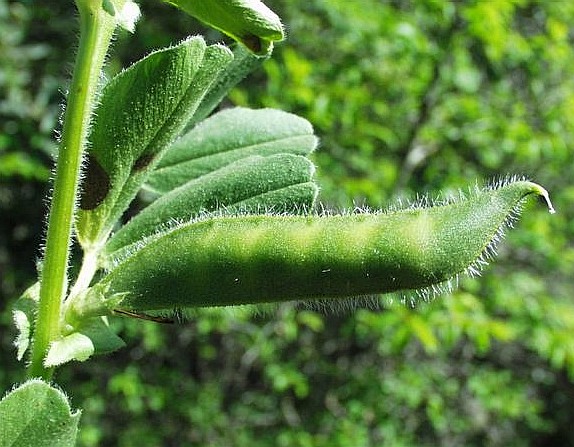 The Narbon Vetch (Vicia narbonensis L.) is an annual legume with thick, angular and erect pubescent stems that can grow without support up to 30-60 cm highThe root system is well developed. The leaves are bi-foliolate, born in pairs, with elliptic to ovate leaflets, 20-50 mm long x 20-30 mm broad. The flowers are papillonaceous, purple or white in colour, and borne in axillary racemes of up to 40 flowers. The fruit is a dehiscent pod containing several smooth seeds, often called Narbon beans, which are 5.5-6 mm wide and brown in colour Like many other Vicia species, the culture of Vicia narbonensis has long been neglected due to the presence of anti-nutritional factors that also cause an undesirable odour and taste in grain and foliage. Since the 1990s, it has become more popular, for instance in Australia, and it is now used as a multi-purpose legume for grain, fodder and green manure in areas of low to medium rainfall. Once cooked to remove anti-nutritional factors, Narbon beans can be eaten and are described as being of high quality. The Narbon vetch is a promising forage, with a good resistance to drought, cold, and aphids. The green parts are used as fodder, grazed or cut for hay. An N-fixing legume, the Narbon vetch is increasingly used as green manure and is also a valuable trap crop for the parasitic weed Orobanche crenata.