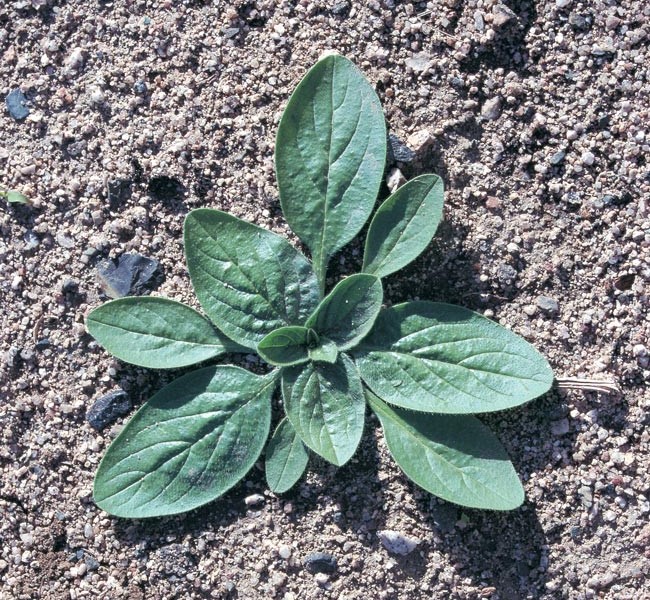 Paterson’s curse is a winter annual herb that often becomes the dominant species in pastures. It is a prolific seeder that can produce more than 5000 seeds per plant per year. Large quantities of seeds may accumulate in the soil over several years. For example, a seed bank of up to 30 000 seeds per square metre has been reported. Seeds may remain dormant in the soil for up to five years.

Paterson’s curse is an erect herb commonly 60 cm high, but it can grow up to 150 cm.

Rosettes have green to light-green hairy, egg-shaped leaves that may grow to 30 cm long. The rosettes are stalked and have distinct, branched veins.

Stem leaves are also hairy, but are smaller and narrower than rosette leaves and are almost stem-clasping. Stems are branched, with multiple stems often arising from the plant base. All stems are covered with stiff hairs.

Flowers are mostly purple, but white, blue and pink flowering plants are sometimes found. The 2-3 cm long flowers are shaped like curved trumpets. Each flower has five stamens, two of which protrude past the end of the flower tube. Flowers generally appear from September to December.

Seeds are dark-brown to grey and have a roughened seed coat. Up to four seeds develop from each flower.

The plant has a stout taproot with numerous lateral roots.

How to control Paterson’s Curse