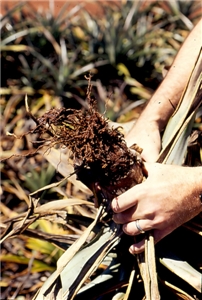 Phytophthora cinnamomi, is a widespread soil-borne pathogen that infects woody plants causing root rot and cankering. It needs moist soil conditions and warm temperatures to thrive, and is particularly damaging to susceptible plants (e.g. drought stressed plants in the summer). P. cinnamomi poses a threat to forestry, ornamental and fruit industries, and infects over 900 woody perennial species. Diagnostic techniques are expensive and require expert identification. Prevention and chemical use are typically used to lessen the impact of P. cinnamomi.

Infection often results in the death of the plant, with earlier symptoms including wilting, yellowing and retention of dried foliage and darkening of young feeder roots and occasionally the larger roots. The plant is unable to adequately absorb enough water from the soil because its roots are damaged and consequently may die. P. cinnamomi causes water deficiency symptoms which can result in tree death, following a slow or abrupt decline. Phytophthora infestans was the infective agent of the potato blight that caused the Great Irish Famine (1845–1849), and still remains the most destructive pathogen of solanaceous crops, including tomato and potato.