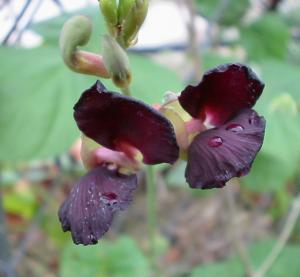 Siratro (Macroptilium atropurpureum) is regarded as an environmental weed in Queensland, the Northern Territory, northern Western Australia and northern New South Wales. It is listed as a priority environmental weed in at least one Natural Resource Management region and is actively managed by community groups in the Northern Territory. This species can form dense infestations along forest margins, and will grow over native shrubs, grasses and young trees, effectively smothering them. Siratro (Macroptilium atropurpureum) is currently of most concern in south-eastern Queensland, where it is ranked among the top 50 environmental weed species and appears on numerous local environmental weed lists (e.g. in Gold Coast City, Ipswich City and Redlands Shire). It has also invaded riparian vegetation and coastal sand dune vegetation in this region and is a problem in revegetation sites, where it smothers young trees and shrubs before they become established. However, siratro (Macroptilium atropurpureum) is also of concern in many other parts of Queensland (e.g. in the Burdekin rangelands, in the wet tropics bio-region and a troublesome environmental weed encountered in rehabilitation projects in the Townsville region).In Western Australia it grows along creek lines and drains in the Kimberley region, especially around Lake Kununurra, while in New South Wales it is mainly naturalised in pastures and along roadsides north from the Sydney region.

A robust creeping herbaceous plant or climbing vine with hairy stems. Its leaves are compound with three slightly-lobed leaflets. Its pea-shaped flowers are dark reddish-purple or blackish-purple in colour. Its fruit are slender pods up to 10 cm long.