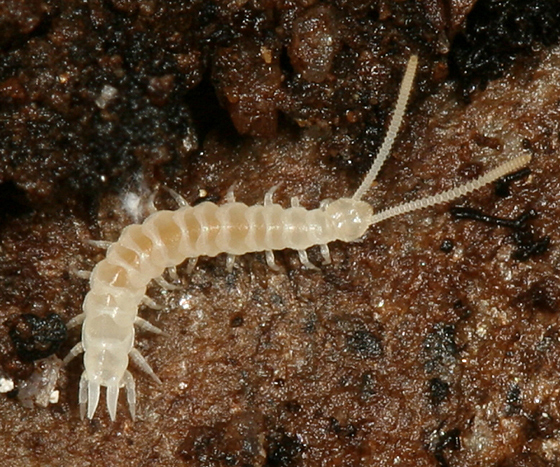 Symphylans, also known as garden centipedes or pseudocentipedes, are soil-dwelling arthropods of the class Symphyla in the subphylum Myriapoda. Symphylans resemble centipedes, but are smaller and translucent, and only distantly related to true centipedes. They can move rapidly through the pores between soil particles, and are typically found from the surface down to a depth of about 50 cm. They consume decaying vegetation, but can do considerable harm in an agricultural setting by consuming seeds, roots, and root hairs in cultivated soil. Juveniles have six pairs of legs, but, over a lifetime of several years, add an additional pair at each moult so that the adult instar has twelve pairs of legs. Lacking eyes, their long antennae serve as sense organs. They have several features linking them to early insects, such as a labium (fused second maxillae), an identical number of head segments and certain features of their legs. About 200 species are known worldwide.