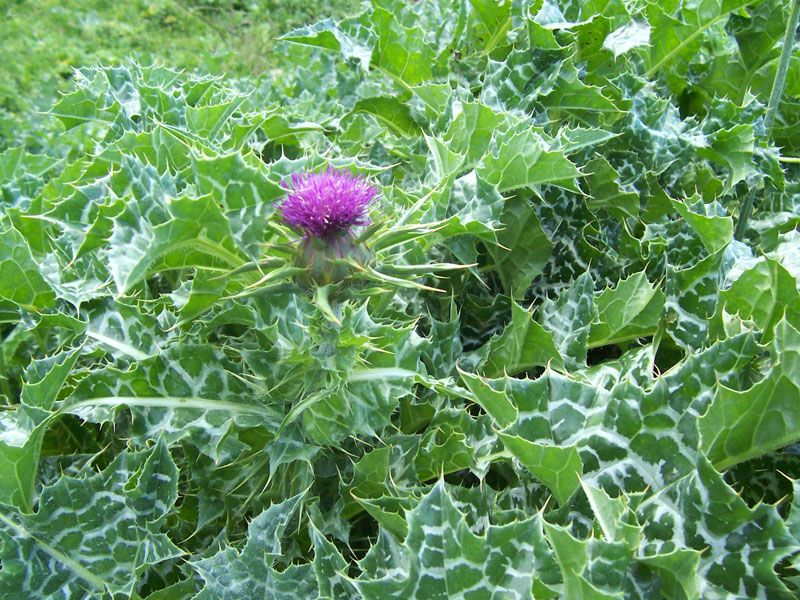 Variegated thistle, blessed milkthistle, milkthistle (Silybum marianum) is a declared pest in Western Australia (WA). This article describes the nature of the plant with links to requirements land owners/occupiers must adhere to and pest control methods.

Variegated thistle is native to southern Europe and the Mediterranean. It was probably introduced as a medicinal plant or a contaminant of grain before its weed potential in WA was recognised. In WA it has become an important weed of the high and medium rainfall districts of the south west of the State. When established it competes with more useful pasture plants for light, moisture and nutrients. Under certain conditions, variegated thistle is poisonous. It can kill cattle and, occasionally, sheep, especially when hungry animals consume large quantities in the absence of alternative feed. It becomes more palatable to stock – and more toxic – when it has wilted after cutting.

It has numerous spines which may cause injury to animals, including domestic dogs. Variegated thistle is also an important contaminant of wool and the plant provides excellent cover for rabbits.

Variegated thistle is usually an annual plant but occasionally does not flower until the second year. A large plant may cover an area of over one metre in diameter. It reproduces only from seed.

How to control Variegated Thistle