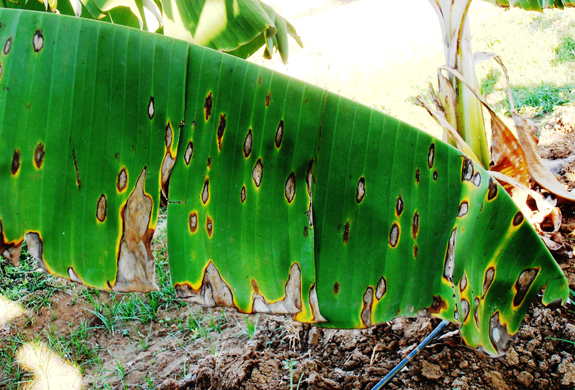 Also known as Sigatoka and caused by the fungus Cercospora musae, it occurs throughout the world and is one of the most destructive diseases of banana. It causes losses by reducing the functional leaf surface of the plant, which results in small, unevenly ripened bananas that fail to ripen and may fall. The disease first appears as small, light yellow spots parallel to the side veins of leaves. A few days later, the spots become enlarge in size and turn brown with light gray centers. Such spots soon enlarge further, the tissue around them turns yellow and dies, and adjacent spots coalesce to form large, dead areas on the leaf. Rapid drying and defoliation of mature leaves are the characteristic feature of this disease.

How to control Cercospora Leaf Spot in Banana