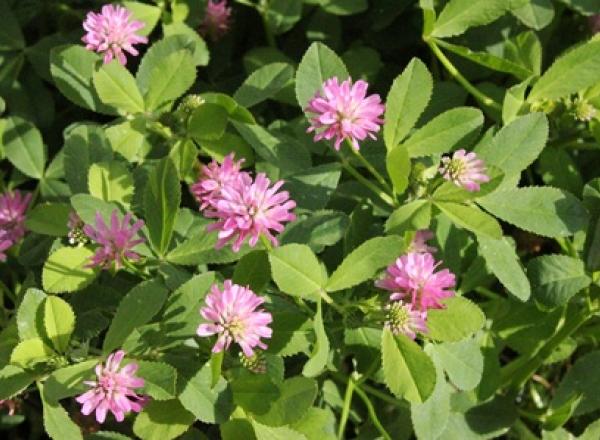 Persian clover (Trifolium resupinatum L.) is an annual, prostrate or semi-erect branched legume, up to 20-60 cm high, similar to berseem (Trifolium alexandrinum L.) but shorter. It forms dense swards and has a rosette growth habit under grazing. The stems are hollow, branching from the lower part. Leaves are trifoliate with 1 to 3 cm long, oval-oblong leaflets. Flowers are pink to violet and mature to white woolly seed heads, with a resupinate corolla, hence the name resupinatum. Fruits are dehiscent single-seeded pods.

Persian clover is mostly used for fodder, supplying highly palatable and nutritive pasture and hay. Its high protein and moisture content may make it unsuitable for ensiling, depending on the variety. Hard-seeded varieties (Trifolium resupinatum L. var. resupinatum Gib & Belli. and T. resupinatum L. var. microcephalum Zoh. ), which have a prostrate habit with smaller and thinner stems and yield large quantities of seeds, are often used on dryland pastures and can be locally important in natural grazing. Soft-seeded varieties (Trifolium resupinatum L. var. majus Boss), which have an erect habit and thick hollow stems that reach up to 80 cm, have a low seed yield and produce high quality forage that can also be used for silage. However, these varieties are not suitable for permanent pastures, as the seeds germinate too quickly during summer and young plants tend to dry during dry periods. In Afghanistan and Pakistan the young shoots of Persian clover may be eaten as vegetables either fresh or dried for later use. Persian clover is also highly melliferous.